How to manage multiproject organizations

Our guest author, Albert Garriga, the man behindrecursosenprojectmanagement.com, covers in detail two of the most powerful methodologies for multiproject situations: critical chain and earned value. 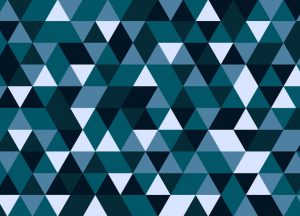 A common situation in many companies is the existence of several projects running in parallel, which share and compete for the resources of the departments. This is what is known as a multiproject environment, and requires criteria and tools to prioritize the allocation of these resources and maximize the overall result of the organization.

In this article, we are going to discuss two methods to be able to manage multiproject organizations; which are based on two well-known project management methodologies: Critical Chain and Earned Value.

Start calculating the earned value of your ITM Platform projects

If projects are planned using the Critical Chain method, the protections of the different projects allow for an objective criterion for the decision making process, at least in relation to the schedule; as this shows the actual status of the project and the risk of not complying with the delivery date.

Imagine that we have six projects, each with its protection related to the tasks in its critical chain and its degree of progress. From this data, we can place them in a graph that shows the percentage completed on the horizontal axis and the percentage of protection consumption on the vertical axis.

The graph would be as follows and allows to distinguish three areas: 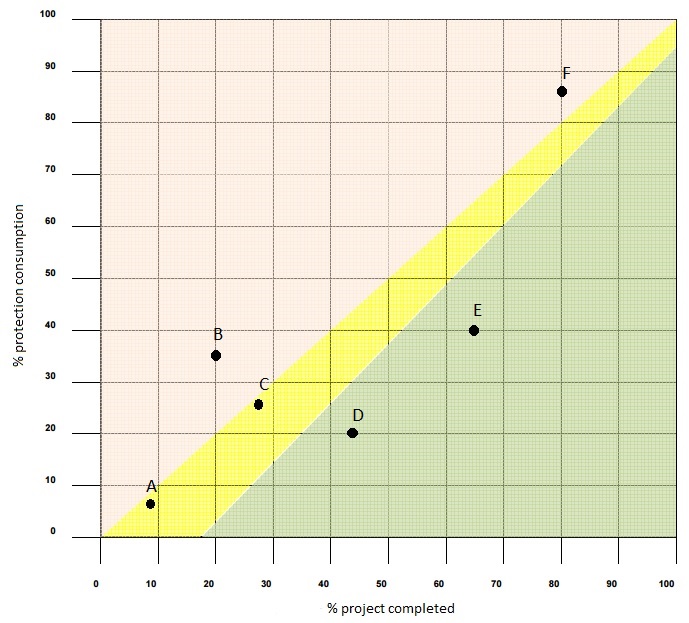 This graph allows us to objectively compare the state of the different projects from the point of view of the schedule, and thus determine which of them need additional action to meet the objectives and which are less of a priority. Obviously, from the point of view of the organization, the objective is that all the projects fulfill their objective, which implies that all are in the green and yellow areas.

Based on this, it would be reasonable to pass resources from the green area projects to those in the pink area, and prioritize the latter in case of conflict. In a way, we are "damaging" the projects that are better to "favor" those which are worse, with the aim of all going as expected.

Another important point when it comes to prioritizing projects according to this chart is to view their progress, since a more advanced project will cost more to change their situation than one that is just starting:

In projects managed with Earned Value, it is also possible to objectively prioritize and compare their status’, with the advantage being that in this case we can make time and cost comparisons simultaneously through different parameters:

Cost variation (CV), which is calculated as a percentage CV = (EV-AC) / EV, where EV is the earned value and AC is the actual cost, which is used with the following criteria:

Schedule variation (SV), which is calculated as SV = (EV - PV) / PV, where EV is the earned value and PV is the planned value, and is used with the following criteria:

Imagine that we have six projects managed with Earned Value, which allows them to be shown together in a chart according to their SV and CV; distinguishing four areas: 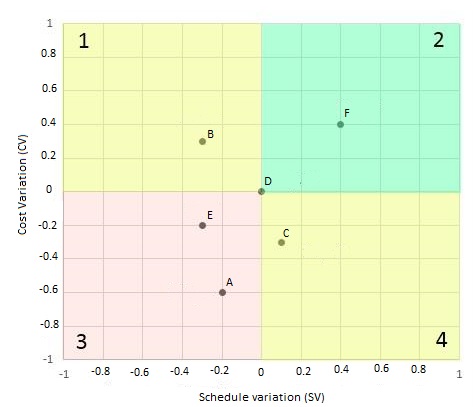 According to this criterion, the goal of the organization would be to have all projects in the green area. Therefore, the criterion in prioritizing resources would be as follows:

The most complex situation occurs in the projects located in area 3, since these must improve simultaneously both cost and time. This implies that we must avoid improving one variable by lessening the other.

So far, the prioritization between projects has been treated objectively and based on quantifiable variables, which is correct but insufficient. In reality, there is another aspect to take into account: the political or commercial interests of the organization.

If we think beyond the time or cost of executing the projects, we see that not all of them are just as important for the organization. In some cases, we will have projects that can generate new orders or have high visibility, which gives them priority. Therefore, the person in charge of managing the portfolio of projects must know these political and commercial aspects, and know how to balance them with the objective criteria.