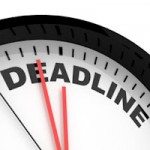 If the most probable estimated duration for a project is 10 months, project managers might be tempted to reduce the target deadline to 8 months and thus compensate for possible delays. According to Parkinson’s Law “work expands so as to fill the time available for its completion”.

The problem is that when a deadline is reduced to an impossible level, team members will have no incentive to meet that deadline. They will realise that the project manager has no respect for them because (s)he believes they will not make an effort if they are not put under pressure. 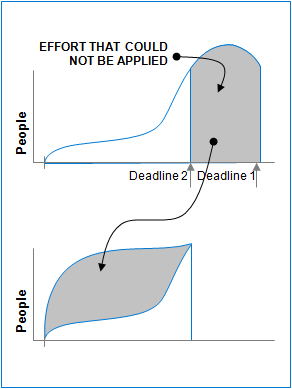 Early overstaffing tends to force projects into shortcutting the key design activity (to give all those people something to do). Ideal staffing requires a small core team at the beginning of the project and then to gradually introduce the rest of the team, which is maintained stable until close to the end.

Projects should begin with planning and design, activities that are best carried out by a smallish team. If design is very important, it can require as much as half the full project duration.

The problem appears when a project has significant time constraints (and how many don’t?). For example, if the client and management have stated that the project must be completed several months early, that limit will bring forward the initially expected conclusion.

There is a natural inclination to take the effort lopped off the end and apply it back at the beginning. But then the project has a pattern of early overstaffing.

The result when swapping months for people is non-design.
Early overstaffing produces a sad consequence in software projects. Early at the beginning, team members start software coding. The programming phase starts with no validated design. The result of a software project with no design is highly uncertain.