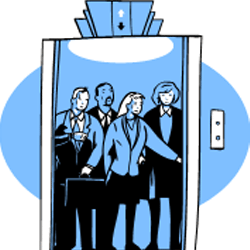 Imagine you are a project sponsor. You enter the elevator and bump into your project manager. There are two kinds of conversations you are likely to have:

Rewind to the beginning. You enter the same elevator but this time bump into an effective project manager. How will this conversation go?

You can know whether a project manager is effective or not just by talking to him.

Can you see the difference? This second project manager clearly conveys a sense of efficiency. What do you think his or her secret is?