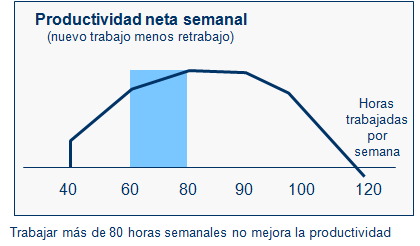 Many project managers (who follow McGregor’s X Theory) think that members of their team need to be kept on a tight leash, that they will produce better work if they are made to feel constant pressure from the start. The more hours they get from the team (unpaid, of course), the better they consider themselves as managers. They start to get a sense of satisfaction when their teams are also working some weekends.

But what if these people actually like their work? Standing over an employee, paying attention to whether they are working or not, continuously hassling them… this might be appropriate in a fast-food restaurant but is certainly not the right approach when managing a project where the work is done with the mind and not the hands. Applying some pressure will get people moving but it will not make them think better or faster.

A number of studies on software projects show that, beyond a certain limit, working more hours does not increase overall productivity. Once you get above 120 hours per week, productivity can actually fall into decline (more rework is required than actual original work). There is an optimum productivity range of between 60-80 hours per week. However, nobody can keep going for much more than 40 hours per week at the pace and effort required by creative work. People under pressure do not think any faster.

An occasional pressure increase and overtime can be useful tactics to keep people focused and increase the perception that their work is important, but prolonged pressure is always a mistake.

It has been shown that overtime is offset by fewer productive hours, or undertime (for example, a working Sunday is followed by a relaxed Monday; if work is done through the night, the following morning is unproductive due to meetings that cannot be finished). Given that these hours are unpaid, overtime is never seen on anyone’s timesheets. Undertime is equally invisible, but it would be reasonable to assume a correlation of one hour of undertime for every hour of overtime.

Some authors compare overtime to sprinting in a race. Sprinting makes sense in the last 100 metres of a marathon (for those with the energy left) but no-one would recommend you start a marathon with a sprint. Forcing people to sprint will only lead to a loss of respect for the project manager. The best workers have been through it all before; they know enough to keep silent while the Project Manager spouts something about the project needing to be finished by an impossible deadline. Then they take their compensatory undertime when they can, and will probably end up putting in 40 hours of real work each week.

A dreadful suspicion: many project managers do not use overtime to finish the project on time but rather to protect themselves from accusation when the project inevitably fails.