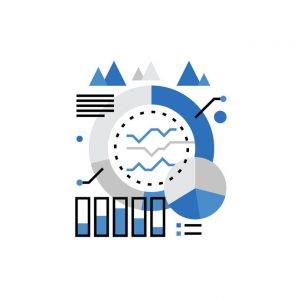 The most common project indicators: time and budget

Traditionally the measures of cost and time have been worked with, commonly known as 'On Time and On Budget'  (OTOB). This means that the project is delivered on time and within budget.

Measure the progression of your projects in real time with ITM Platform. Try it for free

It's normal for any project manager to consider that the most important project indicators are the elements included in OTOB, such as time compliance and the synergy between the budget and the original plan , in order to determine the profitability of the project.

However, there are many more metrics to consider when measuring management effectiveness, project profitability, and even the contribution to the long-term objectives of the organization. Cost and time measures are a start, but it is important to complement them. There are now multiple measures that monitor the project during its development and allow for a more accurate analysis.

Key Performance Indicators or KPIs  serve as a execution guide to examine and evaluate the performance of a project over time, beginning to end. Their effectiveness lies in the evaluation and monitoring, whether they are normal or special projects.

An indicator is not the same as a metric. To evaluate the data captured as a KPI it is necessary to be able to look at the progression. For example, the number of projects not completed in time becomes a KPI when transformed into a percentage and when placed in the context of the total of projects; or when comparing the change from previous years.

How does distance evolve with estimation?

This starting point allows us to understand the complexity that behind the seemingly simple notion of time. Time can lead to a very high number of project indicators, so it is imperative to be able to select the most important and clear ones.

One of the most valuable indicators related to the measurement of time is the deviation from the initial estimates of deadlines. This indicator evolves throughout the execution of the project. For example, by default ITM Platform offers the following graph, in this case on a software development project. 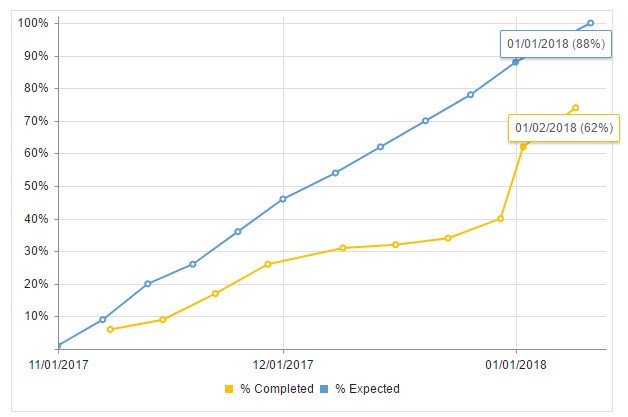 It can be seen that on January 1, 2018 the deviation between expected percentage and percentage completed is 26%, although the situation was even more serious in mid-December, when the gap reached 30%.

From there, it is easy to extrapolate valuable indicators. Let's look at the following table, which compares the actual data with the nearest estimated points.

Although the difference between estimated and actual completed percentage is an interesting value, the variation of the difference is the most important KPI because it identifies the critical points throughout the project execution, such as the inflection at point 4, from which the difference remains above 20 points.

From such a simple indicator, it is possible to examine the causes of deviations in detail, to identify the problems and to put in place measures so that this will not be repeated in the future:

Of course, this isolated KPI can not tell the whole story, or may show a very different version of events. For example, the critical path could have been affected from the beginning by an external factor that, when unblocked, would generate the enormous advance between points 8 and 9; but it could also happen that the accumulated delays were due to a little integrated project team and the final advance to the commitment of the team to save the project before the imminence of the delivery.

That is why it is necessary to use this is conjunction with other indicators and with the practical information that can be gathered from conversations with the team members.