What can we do if a task gets delayed?

During the course of a project, no matter how good the plan or how skilled and motivated the team responsible for its implementation, it is more than likely that it will become impossible to complete a certain task within the allocated period at one time or another.

When faced with such a delay in a project, the project leader should take the steps shown in the diagram below. 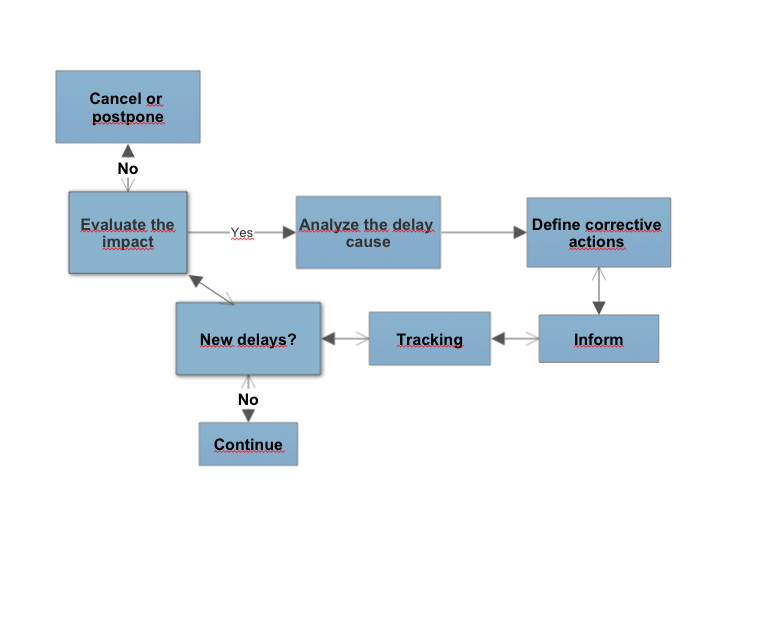 The first step is to assess whether the delay in completing this task has had an impact on the project as a whole. If this is the case, the project manager should examine the causes that led to the inability to complete the task within the allotted time. The next step is to take action and decide which measures should be adopted to complete the task and avoid delays in future projects. Furthermore, the project manager should inform the company directors of the delay and the measures adopted to resolve the situation. From this point on, careful action should be taken to ensure those measures are applied, no further delays occur and deadlines are respected.

Assess the impact of a delayed task

The first step to take when a delay in completing a task has been identified is to study the influence that this task and its delay has on the project as a whole. It is possible that some of the planned tasks are not essential for overall completion of the project or their delay simply has no effect on delivering the project as a whole. In these cases, the task can be cancelled or set aside for a later date.

The cases in which it is important to correct the delay to a task are:

Analyze the causes leading to a task delay

These will vary according to the reason for the delay. A few possible solutions to the examples given above could be the following:

Report on the delay and the corrective actions implemented

Company or project managers should be informed of both the delays that have occurred and the measures adopted to resolve the situation. Clearly, those employees involved in the project should also be informed, both those directly affected by the task delay and all those whose tasks are related to the delayed task.

Closely monitoring all the tasks that are being carried out will enable further delays to be avoided. Furthermore, we should study the impact of the corrective measures adopted and apply the lessons learned to similar situations in the future.