Manage your projects time, it is money! 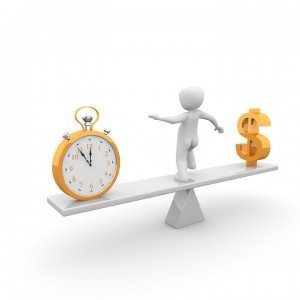 There are two main control variables available to the Project Manager during the course of a project: hours and progress. These two variables enable us to apply Earned Value Management principles and thus gain insight into project performance at any time.

The “hours” variable is used to build a connection between project time and costs, both in terms of estimates and real values. Time and cost move together; “time is money”. Using “hours”, a Project Manager plans his or her entire project and calculates the time needed to complete it, as well as the resulting costs.

We should be clear that more work time does not equal more progress in a project, and a good Project Manager should be fully aware of certain concepts regarding types of hours:

The Earned Value Method (EVM) is used to measure progress on project completion in an objective fashion. This combines three vitally important aspects in the completion of a project: technical (compliance with the planned work); costs (whether more or less is spent than originally planned); and deadline (whether the project is ahead or behind schedule). The components of this are described below:

As Project Manager, you should follow the advice of Benjamin Franklin in the 18th Century and “remember that time is money”. Do not forget to apply the best practices in Earned Value Management and thus monitor the status of your projects relatively easily and simply, being this the perfect time as well to get a good tool of project management, that aloud us to make our work more easy.